The State of California is the most seismically active of all the States in the USA; the State has suffered many catastrophic earthquakes and there is no doubt many more will occur in the future. The 1906 magnitude 7.8 San Francisco quake was the most devastating, killing and injuring thousands of people and leveling much of the city. Ground shaking covered an area of 347,000 square miles.

California has historically responded to major earthquakes by requiring stricter building codes to protect lives and property, with special requirements for critical buildings needing additional protection such as hospitals. If these critical buildings are damaged so that they are inoperable, society’s survival capability is severely diminished. 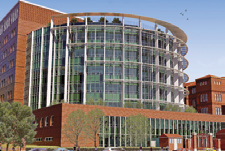 The loss of life and hospital collapse during the Sylmar earthquake of 1971, was the impetus for the Alfred E Alquist Seismic Safety Act. The Act requires that acute care hospitals, built after March 1973, are designed and constructed to withstand a major earthquake and remain operational immediately after the quake to care for the casualties.

The seismic safety building standards program is under the jurisdiction of the Office of Statewide Health Planning and Development (OSHPD).

The 1994 Northridge earthquake saw pre-1973 hospital buildings perform poorly. As a result the Alquist Act requires hospitals to evaluate and rate all general acute care hospital buildings for seismic resistance. The evaluation has resulted in a program of retrofits and rebuilds to ensure all acute care patients are located from existing, non-compliant hospitals to a compliant hospital before January 1st 2020.

Established in 1971 by the California Geological Survey (CGS), the California Strong Motion Instrumentation Program (CSMIP) records the strong shaking of the ground and structures during earthquakes through a statewide network of strong motion instruments. The measurements of the ground strong shaking are used immediately after an event to assist in emergency response. Structural measurements are studied after events to analyze the performance of structures, with the goal of mitigating future earthquake impacts through improved building codes for safer, more earthquake resistant structures. CSMIP also determines instrument location in each building and performs regular maintenance.

CSMIP has installed and maintains recording instruments at more than 1,150 locations statewide, including the city halls of Los Angeles, San Francisco and Oakland, and at the State Capitol. A number of high-rises, dams and all major bridges are instrumented. CSMIP had no hospitals instrumented at the time of the Loma Prieta earthquake in 1989. Now, approximately fifty hospitals are instrumented up and down the State.

Treating more than 100,000 people annually, the new San Francisco General Hospital and Trauma Center (SFGH) rebuild is due for completion in 2015. The new building will replace the existing main hospital building with a facility that meets State seismic safety requirements for acute care facilities.

The new steel framed hospital building is 9 stories high (448,000 square feet), with two basement levels. The new facility has the most seismically-resistant design available with 115 base isolators under the building. During an earthquake the base isolators can slide 30 inches in any direction, greatly reducing any movement of the building. This technology provides the best seismic resistance to allow the hospital to remain operational even after a significant seismic event.

REF TEK was awarded the contract to supply the seismic instrumentation specified by CSMIP.

The accelerographs measure the vertical and horizontal response of buildings and soils. When activated by earthquake shaking, the devices produce a digital record from which the critical characteristics (acceleration, velocity, displacement) of ground motion can be calculated.

Data is transmitted from the instruments to CSMIP’s central computers. The data is subsequently processed by CSMIP and disseminated to seismologists, engineers, building officials, local governments and emergency response personnel throughout the State.

Other hospitals instrumented with REF TEK seismic equipment include: