The new Port Mann Bridge is located in an area of British Columbia that is at risk of the devastating effects of a subduction earthquake similar to the Japanese tragedy of March 2011.

The British Columbia Ministry of Transportation and Infrastructure in collaboration with the University of British Columbia’s Earthquake Engineering Research Facility, implemented a program in the 1990s to instrument key structures to provide confirmation of seismic capacity. REF TEK was awarded the contract in 2011 to supply and commission a strong motion instrumentation network on the new Port Mann Bridge. In 2013 REF TEK was awarded the contract to provide similar instrumentation to monitor the new South Fraser Perimeter Road. The Network was installed with the support of our sole Egyptian agent, Noor Scientific & Trade.

Vancouver lies within an area of complex geology that predisposes this coastal region to earthquakes not only due to movement along the Cascadia subduction zone, but also to earthquakes of crustal and subcrustal nature close to the city. A subduction earthquake in the Cascadia region could have devastating effects, similar to those seen on the east coast of Japan in March 2011 when a 9.0 earthquake and tsunami claimed over 19,000 lives, injured more than 6,000 and destroyed or damaged countless buildings. Due to the complex seismic setting of the southwestern region of British Columbia, a strong earthquake in the region could also potentially activate a gigantic undersea landslide of sediment build-up at the mouth of the Fraser River. 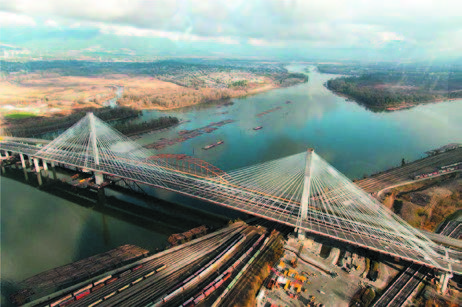 Given the risk to communities and infrastructure in the British Columbia region from seismic activity, monitoring of earthquake activity has been of significant importance to the Geologic Survey of Canada who has been upgrading its regional strong motion network since the early 2000s. Other institutions and organizations in British Columbia have also been installing earthquake monitoring systems. The British Columbia Ministry of Transportation and Infrastructure in collaboration with the EERF at the University of British Columbia implemented a program in the late 1990s to instrument key structures to provide confirmation of seismic capacity. In 2008 the program was expanded to assist in focusing retrofit efforts, perform structural health evaluations and provide rapid damage assessment of those structures following a seismic event. This program is called the “BC Smart Infrastructure Monitoring System” or just simply BCSIMS.

The British Columbia Ministry of Transportation’s Gateway Program1 approved investment in a regional transportation upgrade for Metro Vancouver to address growing congestion and reduce travel times. A major part of the investment was the construction of the new Port Mann Bridge, which is the widest (10 lane) long span bridge of any type in the world at 65m wide. It is the second longest cable-stayed bridge in the Western hemisphere, with the main span between the towers stretching 470m long. The main bridge (between the ends of the cables) has a length of 850m with two towers and 288 cables. 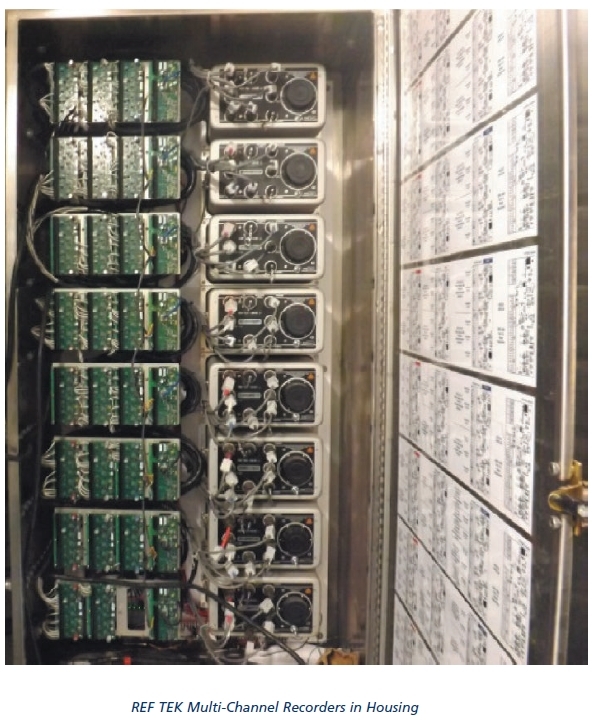 TI Corp was established in 2008 to implement construction, operation and maintenance of the new bridge, as well as the development, implementation and management of tolling operations to pay for the project for a period of up to 40 years.

The system comprises a complex array of ground and down hole stations, accelerographs, cable and structure accelerometers, displacement transducers, wind, temperature and humidity sensors, extensometers, piezometers, gauges and software for real-time monitoring of ground motions and structural responses resulting from seismic activity, traffic activity or any other extreme loading conditions. The array was commissioned and configured by REF TEK’s Global Services team headed by Antonio Sanchez.

Ground motion data is received by NRCan who maintain the Provincial Strong Motion Network comprised of over 130 ground monitoring stations. If the data monitored as part of this network exceeds a prescribed trigger level, a number of actions are taken by NRCan, including the distribution of an earthquake notification to provincial and federal authorities and selected organizations and institutions, and the release of earthquake information to the general public at large.

Nine REF TEK 130-MC Multi-Channel Recorders, with a total of 456 channels, record data from the network of sensors and transmit realtime to The University of British Columbia’s Earthquake Engineering Research Facility headed by Carlos Ventura. The data is analyzed by the BCSIMS analysis tools. BCSIMS integrates data from the instrumented structures which is used to develop post-earthquake prioritization and emergency response for British Columbia.

Six REF TEK 130-SMA Strong Motion Accelerographs are installed at strategic locations to provide accelerations outside the main bridge structure for comparison. Free field surface values, with one triaxial installed on bog surface soil and one on till, give scientists the capability to monitor the amplifications and attenuations between the structure and the soil.

Nine REF TEK Force Balance, Triaxial Borehole Accelerometers, a down hole Piezometer and Barometric Reference Transducer form the free-field down hole arrays located at the Cape Horn interchange on the north side of the Fraser River where surface soils are soft and on the Port Mann Bridge. Removed from the noise of the bridge, the associated down hole array is designed to capture the response of varying layers of soil, and how such layering alters the characteristics of seismic motions as they travel to the surface and shake the structure. Capturing the propagation and travel time from the lowest down hole depth to the ground surface is important, as large and abrupt changes may indicate damage to structural components, allowing engineers to rapidly implement emergency response measures.

Thirty-four Uniaxial, eleven Biaxial, and forty Triaxial Accelerometers structurally monitor the Kensington Underpass and Gaglardi Way Overpass west of the Port Mann Bridge, and the 176 Street Underpass east of the bridge. Engineers are alerted to any deviations and the appropriate inspections and consequent remedial action can be taken at the earliest signs of impending structural problems. The system also includes ambient temperature and humidity transducers, as well as wind speed & direction gauges.

The complete sensor array is structured as follows:

(a) Triaxial Accelerometers (one in ctr. box, one on ctr. abutment cap)

(c) Displacement Transducers (one at each end of expansion joint)

(f) Uniaxial, Biaxial and Triaxial Accelerometers (at interior corners near base of pylon)

(h) Uniaxial and Biaxial Accelerometer (at knuckle and upper pylon)

(m) Triaxial Accelerometer (on side of center footing)

Fifty-six Low Profile, High Exposure Triaxial Accelerometers are attached to the Stay Cables to provide valuable data to the scientists.

Eight lanes on the new bridge opened to traffic December 1, 2012, significantly expanding the capacity of the original five lane bridge, and removing major highway congestion points at either end of the bridge. Dismantling of the original bridge is underway so that the new Port Mann Bridge can be completed to its final 10 lane width.

The system was commissioned and certified by REF TEK on time for the opening of the bridge and the success of this project has resulted in REF TEK being awarded the South Fraser Perimeter Road seismic and state of health monitoring instrumentation project.

The South Fraser Perimeter Road, a new four lane, 40km highway along the south side of the Fraser River will provide a new east-west transportation corridor to reduce the volume of regional truck traffic and idling on local roads.